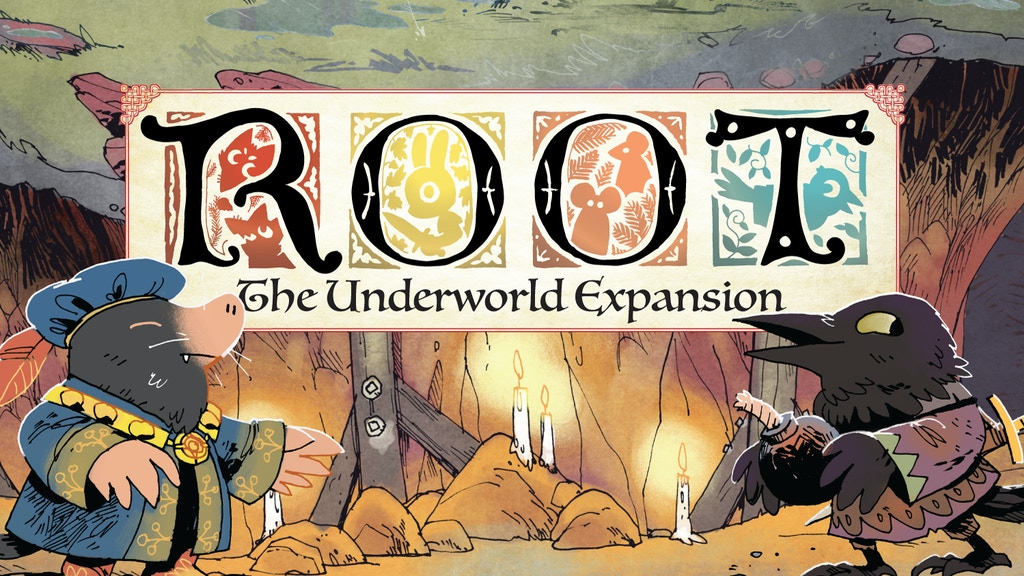 Delve deeper into the world of Root with the Underworld Expansion, which adds two new factions and a new board.

Underground Duchy – Sway your ministers to lead a righteous expedition to the Woodland, bringing order to the unending war and chaos above.

You’ll love the Duchy if…

You’ll love the Corvids if…

You like the Alliance because of their sneaky play style, and you want more room for outright trickery
You like the Lizard Cultists because battling them can actually help them, but you want more control over your army
You like the Vagabond because he’s a thorn in everyone’s side, but you want a force of warriors too
Root Underworld Dutchy
The Great Underground Duchy, an ancient kingdom ascending to the surface.
The Duchy can muster a huge army of warriors & become a formidable military power. But the Duchy makes its home in the Burrow, located deep under the Woodland. To establish a foothold in the forest above, they must dig tunnels, which can appear in any clearing on the map. The other factions will never see it coming! They can’t stay passive—only by building Markets & Citadels in the Woodland can they gain enough allies & warriors to pose a threat.

The Duchy is overseen by a council of ministers, fickle politicians who must be swayed to the task of establishing a presence in the Woodland. The Duchy must prove that its mission of conquest is going to plan, revealing cards from their hand that match clearings they have pieces in. The more ministers they sway, the more actions they get per turn. Beware, if any of the Duchy’s buildings are destroyed, there’s a political cost to pay—their minister of highest rank will quit, & they’ll discard a card, making it harder to sway ministers back.

Root Underworld Corvid
The Corvid Conspiracy, espionage masters and devious plotters.
Criminal syndicate? Machiavellian manipulators? The Corvid Conspiracy is many things, & nothing if not secretive. Like the Alliance, the Corvids are terrifying because you never know their true plans. They operate by hatching plots—raids, bombs, extortion, & snares—which turns the Woodland clearings into minefields, leaving the other factions unsure whether to stay put or run. After all, the bomb is as powerful as an Alliance revolt, destroying everything except the Corvids in its clearing.

But the Corvids are only as powerful as their secrets. If the other players can figure out the Corvids’ plots & guess them correctly, they can expose & remove the plots at no cost to themselves. This makes the Corvids easy targets if their plans are too obvious, so they’ll need to be unpredictable & bully the other players into leaving them be. If their mind games are good enough, the Corvids will snatch victory straight from the hands of their foes.